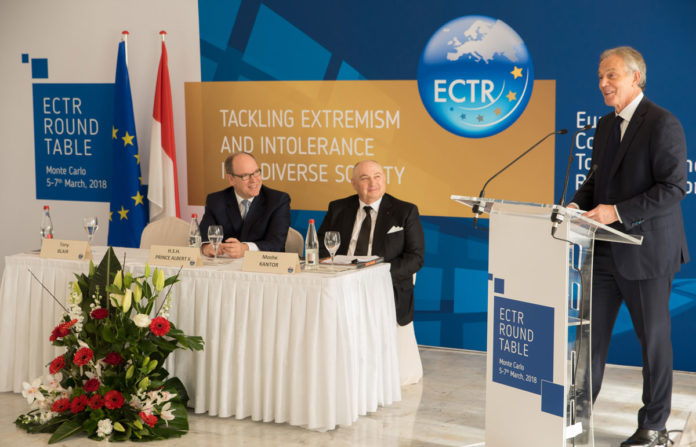 The ECTR held a Round Table entitled “Tackling Extremism and Intolerance in a Diverse Society” in Monaco on 6 March 2018.

The event gathered political, academic and NGO participants from 22 countries to address the threat of radicalisation and issues surrounding the challenges to tolerance in Europe. The three key issues discussed were political radicalisation, online hate speech and integrating immigrants in diverse societies.

Opening the Round Table, ECTR President Dr. Moshe Kantor warned that social fragmentation combined with a disenfranchised population were a breeding ground for extremism in Europe.

The ECTR intends to support new thinking on how to make tolerance more secure and sustainable. At the Round Table, Dr. Kantor launched the €1 million ‘Kantor Prize For Secure Tolerance’. The prize will be awarded by ECTR leading panel of academic advisers, including philosopher John Gray and historian Antony Beevor. Dr. Moshe Kantor said the prize rewards “exceptional achievements in research and advance thinking on ‘Secure Tolerance’”, to promote progressive thinking to help Europeans act in advance of impending threats to their security and human rights.

Making a special welcome address at the event, HSH Prince Albert II of Monaco reiterated his appreciation and support for the ECTR activities to promote a new concept of tolerance for Europe.

ECTR Chairman, the Rt. Hon. Tony Blair said it was “essential we don’t sit back and let extremism and intolerance become an accepted part of our public discourse”. “Co-existence is a vital universal value in a world where people of different cultures and religions mix, both on and offline, more than ever before […] Freedom of speech must be protected. But people have a right to feel safe in their homes and communities,” he added. Paying tribute to the announcement of the Kantor Prize for Secure Tolerance, the former British Prime Minister said it was “such a welcome initiative, as it seeks new ideas from leading thinkers to preserve and create free, open and pluralist societies”.

Stressing the need to support thinking to make tolerance more secure and sustainable, Dr. Kantor argued that without clear and proactive “action to prevent these threats, the errors and disasters of the twentieth century could be repeated”.

The European Council for Tolerance and Reconciliation held on March 5-7th, 2018 in Monaco a Round Table discussion “Tackling Extremism and Intolerance in a Diverse Society”. The conference was held under the Patronage of the Secretary General of the Council of Europe, Mr. Thornbjorn Jagland.