Meetings and ConferencesEuropean Medal of Tolerance 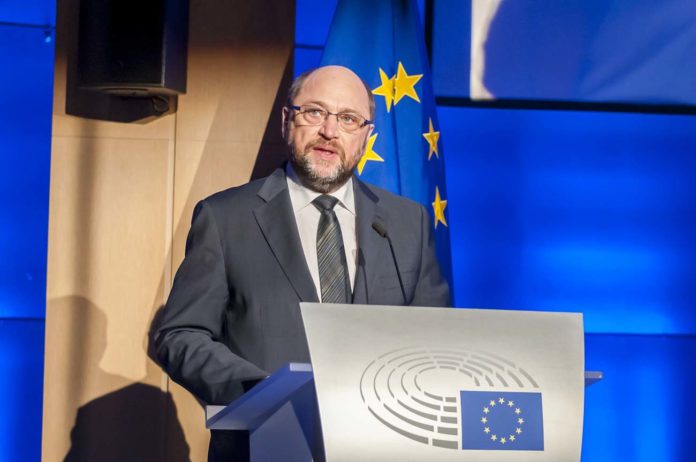 Dr. Moshe Kantor, President of the ECTR, said that the medal is being awarded to Schulz in recognition of his commitment to the preservation of the memory of the Shoah and the exceptional leadership in the struggle against the rising wave of ultra-nationalism and hatred in Europe.

“The number of hate-motivated crimes and incidents is rising around Europe. Political extremism both inspires and profits from these acts. At this worrying time it is important to send a clear message that political courage and moral leadership is vital for our societies,” Dr. Kantor said.

“Martin Schulz, the outgoing President of the European Parliament, is a man who throughout his political career has taken an uncompromised stand against xenophobia, intolerance and political extremism in Europe.” “A strong and unified Europe is the greatest barrier against hatred and extremism and even during some very difficult years, economically and politically, President Schulz has remained a voice of reason, sanity and unity.”

Martin Schulz, the out-going President of the European Parliament, is granted the award amid a time of rising racism, xenophobia and anti-Semitism, with a growing political representation of movements with intolerant agendas in parliaments across Europe. Populist and radical movements profit from challenges posed by financial and economic crises, conflicts in the Middle East and waves of immigrants coming to the EU. Spread of hatred and xenophobia is made easier due to the use of social networks and internet media, where extremists hide behind anonymity. The ECTR fosters projects and initiatives that help to address these challenges.

The European Medal of Tolerance is intended to honor living individuals and active public or private bodies and institutions that have made a significant contribution to promoting and safeguarding, democracy, respect and tolerance on the European continent. In the past the Medal has been awarded to His Majesty, the King of Spain; president of Croatia Ivo Josipović and former President of Serbia Boris Tadić; footballer Samuel Eto’o and the FARE (Football against Racism in Europe) Network.

The ECTR is an opinion-making and advisory body on international tolerance promotion, reconciliation and education, and fosters understanding and tolerance among peoples of various communities, educates towards techniques of reconciliation, facilitates post-conflict social apprehensions, monitors racism, Antisemitism and xenophobia and proposes pro-tolerance initiatives and legal solutions. Among its prominent members are Tony Blair (ECTR Board Chairman), Jose María Aznar, former Prime Minister of Spain, Göran Persson, former Prime Minister of Sweden, VairaVike-Freiberga, former President of Latvia and Rita Süssmuth, former Speaker of the German Bundestag. Founding member of the ECTR was the late Vaclav Havel, one of the principal leaders of the democratic transformation in Central Europe. www.ectr.eu

Martin Schulz, President of the European Parliament, has been chosen as the recipient of the 2016 European Medal of Tolerance in the area of politics.